Oh me, oh my! Where do I even begin to talk about my experience on the weekend? What experience you ask? Well, that is probably the best place to start.

Twice a year, the Stylecraft Blogstars head over to the mill at Slaithwaite to meet up with the fabulous Annabelle, Sophie, Anna and Juliet (and others whom I haven't met yet - we'll get to that though), and talk about the upcoming season and (SQUEE) new yarn! Those of you who have been following me, know that I'm in Australia, so while it's technically possible for me to attend, realistically it will be a few years before I can get over there to actually physically do it. 😭

So, this time arround, we tried SKYPE. I wasn't the only non-UK member this time, my beautiful friend Zelna of Zooty Owl joined us from South Africa. We had a bit of a dress rehearsal a few days before, because the best laid plans of mice and technology "gang aft agley" (translated - go pear shaped, lol. Dear Mr Burns just rolled over in his grave!) With a bit of fiddling, and a definite "I don't think this will work, Mum." from an "anonymous" source, we actually got there, with Zelna and I in a joint SKYPE chat with Annabelle. That was it, the bar was set! This was going to work!

In anticipation of the weekend, Stylecraft had sent Zelna and I yarn packs in opaque bags with big lettering saying "Do not open until February 4th". I have to tell you, it was the most unusual form of torture to see the box with those puffy bags and not touch them, but I did it! (Mind you, I did consume more chocolate than normal). You will have to wait until the next post to find out some of what they contained, because some of that news is still embargoed. I know! It's killing me not to tell you!

Now, one thing you don't think of when you're talking about international chat, is time zone differences. The Blogstars arrived at the mill on Friday afternoon and went for a trip to the Knit and Crochet Guild Archives. Apparently it was fascinating, but you're going to have to check their blogs for what it was like, I cannot help you there. So, for Zelna and I, the weekend actually started on the Saturday morning. It isn't so bad for Zelna as she's only two hours ahead, but I'm a full 11 hours ahead at the moment, so when they commenced at 10am, it was already 9pm my time. I have to say though, I would do it again in a heartbeat, and I wish it was every weekend!

So, here's a shot of my talented companions, from Left to right: Jane of Janie Crow, Phil of The Twisted Yarn, Sarah of Annaboos House, Heather of The Patchwork Heart, Julia of Hand Knitted Things, Lucy of Attic 24, Helen of The Knitting Exploits of Josie Kitten, Emma of Emma Varnam, Sandra of Cherry Heart, Lucia of Lucia's Fig Tree and last but certainly not least, Kathryn of Crafternoon Treats. The gorgeous Sue of Shropshire Scrapper Suz unfortunately couldn't be with us this time. 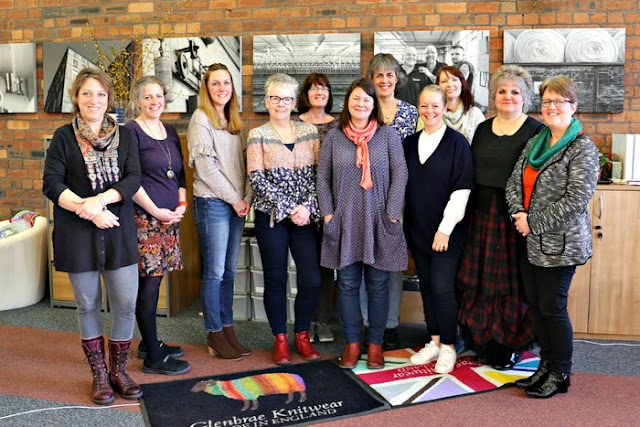 That's a lot of talent for one room, and for me, they're all my crochet idols, so by the time I was due to sit down at my computer and log into skype, I was ready to either pee my pants or vomit! (So I went to the bathroom and at least eliminated the first option, lol).

Now, you must be wondering what went on. Well, lots of introductions, lots of laughter, and a great deal of learning by everyone. It was a thoroughly well thought out day. The first item on the agenda was of course the yarn on the table - or in my case, the parcel beside my chair. I was finally allowed to open it, and there was much laughter in the room at my OOh's and Aaahs and Oh Wow's. They got it, they knew my excitement - it was such a beautiful moment for me because they UNDERSTOOD! I tell you now, it was better than Christmas morning when you're still a child. It was the "best Christmas morning ever" lol. I wasn't the only blogstar keen to get a look at what was inside. 😜 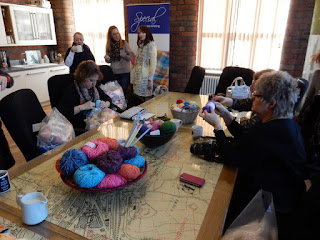 Now this is the kind of meeting that all yarnies want to go to - nobody bats an eyelid when you pick up hook or needles and start working way. In fact, it's encouraged! But of course, it wasn't just a stitching event, lol, so eventually we turned our eyes toward the projector and got down to business. 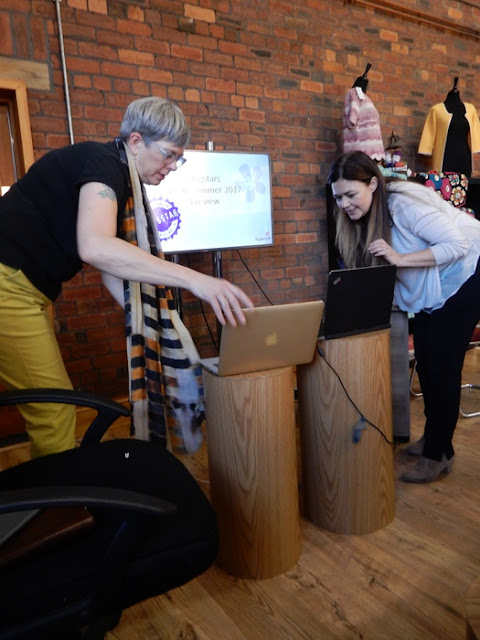 I'm the shorter one with the silver computer lol. They were all saying how we had special treatment with "Front row seats!" I have to agree, it was an excellent spot to sit, and we had copies of the powerpoint presentation emailed to us beforehand.

I could show you what was in it, but then I'd have to kill you. Suffice to say, my heart was constantly having little flutters! There should be a warning before they show you lovely things like that! 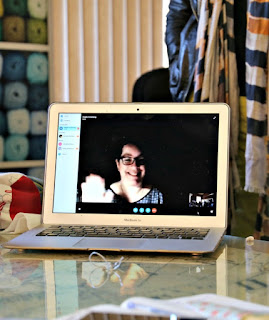 Here I am, in the dark like a good little mushroom, lol, being introduced to the others. Very kindly they all came one by one up to my screen and gave their name and blog and said hello. (Like I wouldn't know who they all were because I admire them so much, giggle). The blur in the corner is me waving to them all. You can see how excited I was. Later on I turned on the overhead light, but at that point I wanted to be unobtrusive while the powerpoint got underway. 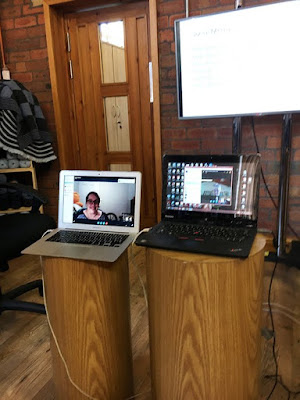 Here we are after the powerpoint, and I'll show you the view I had....

It's a bit blurry I'm afraid, but I spent several hours just absorbing so much. Now that I've seen the podiums I understand why, but I kind of felt like a little kid at the adults table. LOL.

After all the important stuff was done, we then had a workshop on Tunisian Crochet. I've had a bit of a dabble with this before, I've tested a pattern for a friend, but it was a bit of a mental exercise to remember how to do it. I'll show you what I managed to cobble together in the next post, because the yarn I used to do it with is one of the new yarns by Stylecraft and it is awesome!


A special thank you to Phil Saul, Sophie Cromwell and Helen Kurtz for allowing me to use their photographs. xoxo
Posted by Angela Armstrong at 23:45