In a couple of my patterns now, I've used something I call the spiked cluster stitch. Most tutorials that you find on the web have five prongs, but I only want three for mine, and I want them all working into the same row.

I've been looking everywhere for a tutorial to link to, but I cannot find one done in "my way", so I'm going to torture you all with my alternative version. ;)

This stitch is used in my Million Dollar Shawl Pattern, and in a soon to be released square pattern. So I thought it was appropriate for me to "get the word out there" in advance of the new release. So, without further ado, here's my version. xoxo

Spiked cluster stitch sounds scary, but it really isn't. It's just a combination of spike stitch, which you work several times in various ways in this pattern, and cluster stitch. It appears in Row 43 of the "Million Dollar Shawl" pattern and in round 10 of my soon to be released square.

There are two things to note, firstly, you skip a stitch. You will work sc before and after, but you do work into previous rows between them. It may help, to start with, to put a stitch marker two to the left of the last stitch you work in to show where you resume working your sc's as it becomes hidden by the bulk of the cluster when it's done. Secondly, from above, as you count the <<<<< shapes - there are two << for the cluster stitch because you finish it with a ch1, but you will count them as one, so be careful when working the next row that you don't work into both the eye and the ch.

Each pattern is different, so you will need to read the requirements of the particular pattern you are using this method with. To start with, you will SC into x number of stitches. {See image 1}.

Take a look at the rows below and work out which row it is that you have to work into. {image 2}

Visually look to the space of the stitch you are going to skip, follow it down two rows, then count two further spaces to the right. YOH, insert into that space and draw up a loop. {image 3}.
This is very specific for the shawl pattern. In other patterns you will need to look to what the designer specifies. In my square pattern, you are directed to the exact stitch you will work into.

To help with tension, bring the hook right back up to the top of the work to make that spike long enough not to pull. Otherwise, you will end up with a dip in your work. YOH. {3 loops}

Insert the hook into the space directly below your skipped stitch and draw up another loop {5 loops}, again bringing it to the top of the work. {image 4}.

YOH, count two to the left of where you drew up the last loop, insert the hook and draw up another loop. {7 loops} and bring the hook to the top of the work. {image 5}

The next sc that you work into should be just peeking out from under the last loop. {image 8}.

This is why you might want to put a stitch marker in, as it's usually hidden by the third post of the cluster.

So there you have it, Spiked Cluster Stitch - done my way. ;) Maybe we should call it a tripod stitch? LOL.

Happy Hooking
xoxo
Posted by Angela Armstrong at 11:41 No comments:

I don't do things by halves, and I often jump into projects before I've really thought them through, so this pattern has taken a little longer than usual to come together. If you ever want to design a rug in t-yarn, or bulky yarn, my advice to you is to do it in DK first. (Thanks Crochet in Paternoster for that fabulous tip).

A pity I'd already done prototypes one and two. LOL.

My second piece of advice, is design in a plain colour. I had variegated yarn to make my rugs with, and started with a busy one indeed, but it was only as I worked through it in cream DK that I saw the potential shapes, and ended up completely rewriting the pattern (I had to frog two nearly completed rugs back down to round 3). It was necessary to do it, as I discovered through my testers that the original pattern that worked in my chunky yarn and at my tension, completely bowled up (too few increases) when worked in anything else and by anyone else. So, of no use to anyone.

I'm currently reworking the second large rug (pictures to follow), but the first came out so well, and the efforts by my testers were so fabulous (thank you Margaret, Anna and Courtney) that I couldn't wait any longer to share it with you!

Feel free to work this into anything you like, beret, floor rug, doily, cushion cover. I do, however, ask that you acknowledge this page as your source of inspiration. I've spent too many hours putting this together for someone else to claim it as their own. 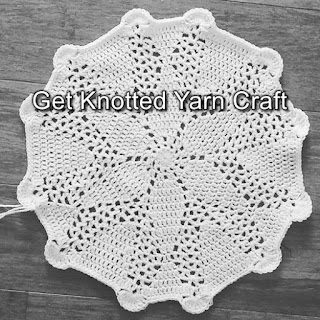 Petals and Sepals by Angela Armstrong
Materials: DK and 4mm hook OR Super Bulky and either 10 or 12mm hook depending on WPI.

DC decrease = Work the first part of a DC (yo, pull up loop, yo, pull through first two); then start the next stitch and do the same, you should have three loops on your hook. YO and pull through all three to create one stitch from two.

Pattern Notes: Chain three at the beginning of a row counts as a DC for that row. Read it as such when working repeats.
All rounds are ended with a sl st to join.
This pattern is written using US terms.

Alternative to Row 18 - if like me, you find yourself with insufficient yarn, you can work a fan with 6DC instead of 9tr, or simply work 1sc into the right side of the V-stitch, then 3 more into the ch sp, and another into the left side of the v-stitch, and continue working on. 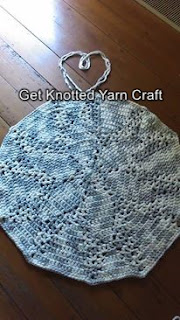 In the above picture, I ran out of yarn and ended up with the third version using only SC's. It is 92cm across from point to point, or approximately 36.5 inches.

As you can see, there is more than one way to skin a cat, as they say. I thought it would look good in colours, so I drew a rough diagram for my friend Courtney of Spin a Yarn 32, and asked if she was able to do a colour version for me. This is what she came up with: 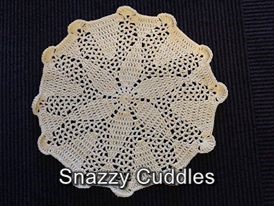 This is Margaret's testing of my pattern. She used 3 ply cotton and a 2.5mm hook. I just love it!

I hope that you all love working this pattern just as much, and if there is a problem, please don't hesitate to contact me (best to do it on Ravelry, I check in there pretty frequently) I hope that you create a project page on Ravelry too. xoxo

Posted by Angela Armstrong at 22:06 2 comments: